Our next stop after Delhi was Leh, a town in Ladakh in the Indian Himalayas. The town and airport are around 3,500m above sea level so we followed the advice to do nothing for the first day or so whilst acclimatising to the altitude. 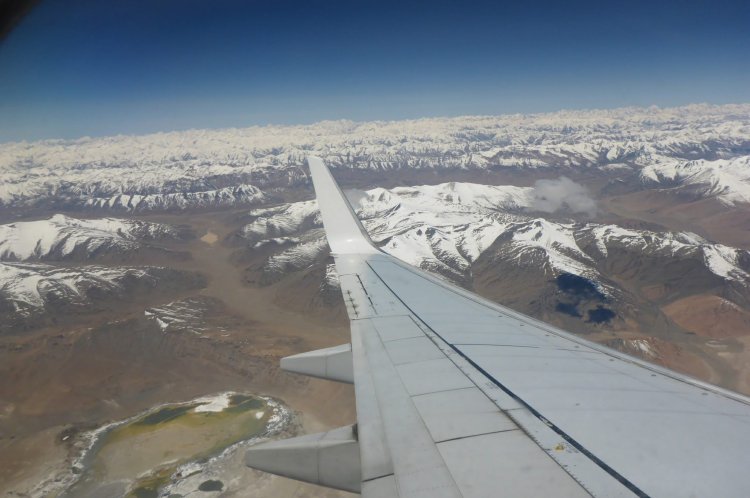 Luckily the guest house we booked had these incredible views so sitting around doing nothing wasn’t too much of a chore! We were also pretty exhausted after our busy day in Delhi and getting up early for our flight here.

The guest house, like so many in the area, is undergoing renovations and expansion. It seems like the town is doubling in size. There are strict rules here about litter, and as there are no recycling facilities plastic bags are banned, and bottled water is not as common as elsewhere in India. The water quality is better than Delhi, but there is a growing problem of more and more boreholes being dug to support the expanding population and tourism. Coupled with a lack of proper sewage system, and the water could actually be getting worse. But because bottled water isn’t as prolific, there is filtered and boiled water available at most places. Of course, Jay isn’t taking any chances and made sure we invested in Water To Go bottles, which filter and purify water from any source to make it safe.

On our first full day we wanted to go to Leh Palace and the monastery, but they’re a few hundred metres higher than the town and we were just not acclimatised enough yet. Even walking on flat ground had us out of breath! We checked our oxygen saturation at the local oxygen bar – Maeve’s was 95% and Jay’s 84%, which apparently is normal for Leh! (note for non-healthcare people, 84% would be considered very low in the UK!)

So instead of walking anywhere, we spent much of the day lounging in a vegan cafe overlooking the centre of Leh, the palace and the actual Himalayas!

Maeve had been feeling pretty ropey so we planned an evening back at the guest house to relax, and breathe. Unfortunately she was worse overnight, so it wasn’t as restful as we’d hoped. Things were weird in our guest house the next morning, when they tried to charge us 3 times what we had agreed to pay. However we managed to escape with our budget intact, and we headed into town to a new hostel. Over the day Maeve managed to eat for the first time in 24 hours and we got some extra bland pasta for dinner.

We sat on the roof of the hostel to enjoy our take away and watch the sunset over the Himalayas. The crisp air carried the sounds up from the streets below, and the palace glowed pink in the evening light. It was beautiful!

The next day after a good sleep we both felt ready to have a go at the slog up to the palace and monastery. After an epic breakfast we headed up hill and were treated to incredible views all the way. High above the town the prayer flags rustled in the wind as lizards skittered over the shattered rocks.

The monastery was stunning but we didn’t have long. We were leaving a few hours later to head to our next stop! The path back down to the town was a rough zigzag across a huge scree slope, so we decided to run down it. This was obviously not the norm and attracted a lot of attention from the tour guides. At the bottom, while stopping for a cold drink, in a place with only a hole in the ground loo, no loo roll or soap or water, we discovered that I had succumbed to the evils of Maeve’s stomach bug! Eventually we made it back to the hostel room and I spent some time studying the bathroom while Maeve was a total hero and went to find out where our bus to Phyang was leaving from.