We had boarded the night train from Hà Nội, Vietnam, en route to Nanning, at around 21:30, and got ourselves settled in our 4-berth sleeper carriage. We were sharing with a young guy and no one else, so it felt relatively spacious. It was the equivalent of travelling first class on the usual Chinese trains, but for some reason it was substantially cheaper than the equivalent journey within China. The cabin beds were soft and ready made, and we collapsed into them gratefully.

We knew we’d be crossing the border around 1am, and idly wondered whether we’d notice, or if we’d be fast asleep by then. We figured that we’d get processed at Nanning when we left the train. Around 00:30, with the rumble of the train lulling us to sleep, we drifted off in our comfy cabin, dreaming of motion.

Suddenly at around 1am all the lights came on, the cabin door opened and someone shouted something at us. People from other cabins started walking past the door and we noticed that they all had their luggage with them. We were tired and completely confused and had no idea what was going on. As the last person filed past we realised that they were all going into the station we’d arrived at, and fearing the train was going to disappear with us still on it we hurriedly packed our bags, which we’d partly unpacked earlier when we settled in for our long journey.

Stepping off the train, our passports were scrutinised by a man in Vietnamese military uniform. They must have been ok as he gave them back and walked off. In the arrival hall we passed our belongings through the scanner and joined a huge queue of passengers. We were at Vietnamese customs and waited in an air of tension to pass through, unsure of what was happening, or of what our onward travel would now consist of. Another officer walked through the queue, spotted us and headed straight over. He also spent time flicking through our passports and handed them back to us with a perfunctory nod and an “ok”. Rounding a corner we could see the immigration desks, and more military officers. They stood around the walls staring at the bleary eyed queue of travellers. One pointed to us, calling to his colleagues, and they all watched us for a while. Our passports were stamped and we were allowed to leave Vietnam. As we left the hall, another officer took our passports for a good look. One told Maeve she didn’t have a visa for China, while holding the passport open at the page with the visa printed on. It was all very strange and deeply frustrating after less than an hour of sleep. We piled back on the train, into the same cabin, and rested fitfully for an hour or so before going through the whole thing again at customs on the Chinese side of the border. This time we had the added fun of a bag search, but it was relatively quick and painless.

Back on the train and we both slept fitfully for a few hours. From around 5am the train driver started blaring the horn like an Indian bus driver. Although it sounded distant coming from the front of the train it did keep us both awake. One benefit of this was being able to see some of the karst landscape at dawn: sharp peaks, impossibly close to the railway, lit up in pinks, oranges and baby blues.

We spent one night in Nanning in a pretty depressing hostel. The mattress foam was so thin and soft that we may as well have been sleeping directly on the wooden slats of the bed. But, after a second poor night of sleep in a row, we arrived at our cat sitting assignment in Shenzhen.

Get ready for kitten spam! 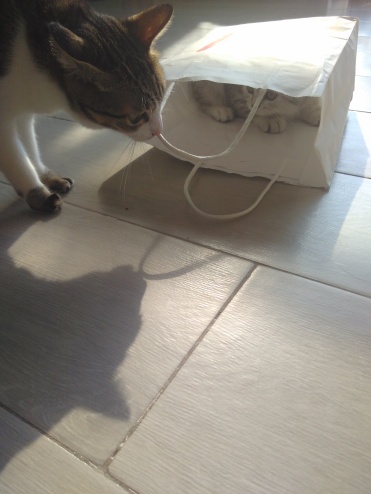 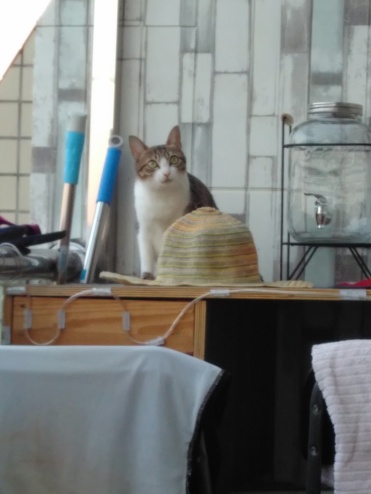 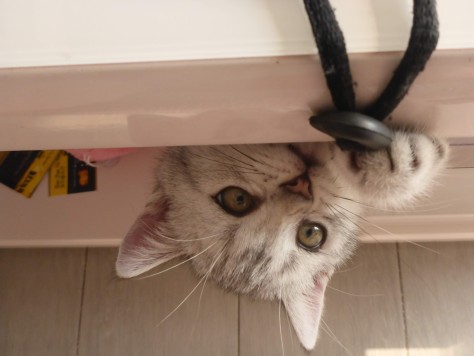 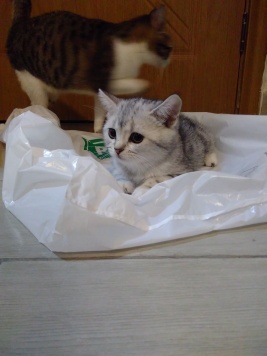 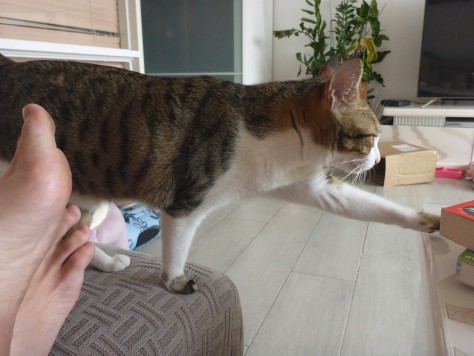 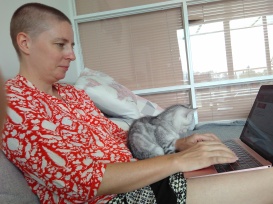 We spent a mostly relaxing week in Shenzhen hanging out with two kittens we were taking care of whilst their owner was on holiday. The place we were staying was on a luxury golf resort with access to an enormous shopping mall and a hotel with a swimming pool. We had dinner at the mall on our first night, at an “Italian” restaurant that had been recommended as having vegan options. We ended up with an arrabiata that was tomato puree with a bit of chilli sauce (no herbs at all!) and the blandest pizza ever. We treated ourselves to cocktails, but when Jay requested a Pink Lady, the waiter basically said no! He muttered in broken English about how women like that drink and wouldn’t Jay prefer a Long Island Iced Tea? Not our best dining experience!

The flat also had a lovely balcony with a view out over the resort, which we enjoyed eating dinner on as the temperature cooled after dusk.

We really enjoyed being able to cook our own food, and have space to ourselves for the week. We’ve been mostly staying in hostels, which are great for having cooking facilities and space to hang out in, but it’s very different having a proper kitchen and a living room to yourself. We also really relished being in the same place for long enough to buy groceries for several days, to fully unpack, and of course do several loads of laundry! We had multiple breakfasts/brunch every day, which was such a luxury. We even found Heinz beans and decent wine in the supermarket.

We ventured into Shenzhen a couple of times, although our first attempt was abandoned when we got to the metro station and there was a queue down the street. It was Chinese National Day (the anniversary of the formation of the People’s Republic), which we thought would make for an interesting day to visit the city, however it was clearly going to be so busy as to make it incredibly unpleasant in the 30-plus degree heat, so we grabbed some groceries and went back to hang out by the pool instead!

The one full day we spent in Shenzhen was mostly a mission for vegan food. There are several vegan restaurants in the city and we tried to visit most of them. Sadly two (including the bakery/dessert store!) were closed, but we did have an amazing meal in a weirdly empty shopping mall. 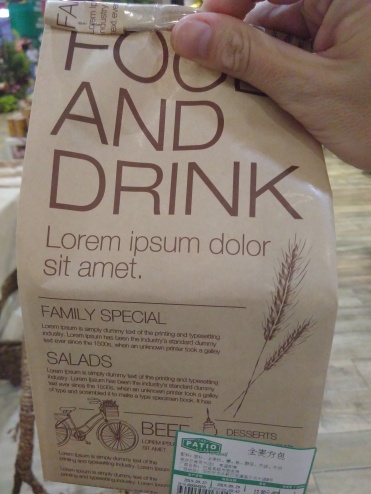 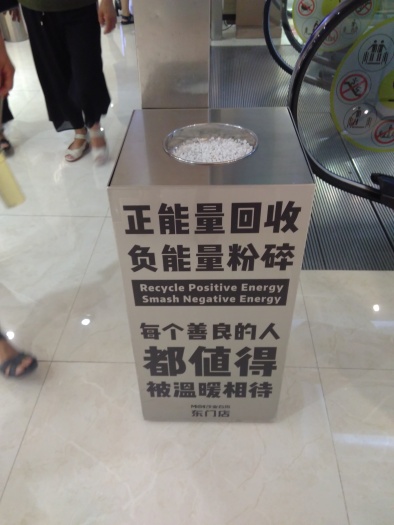 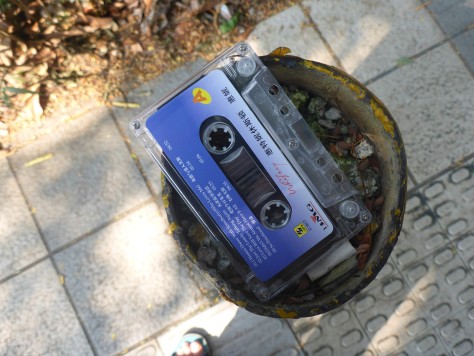 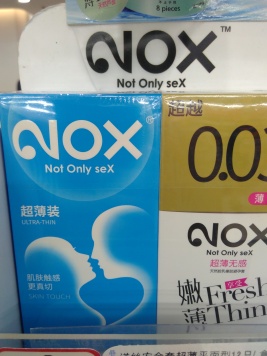 Not sure what else you’d buy these condoms for 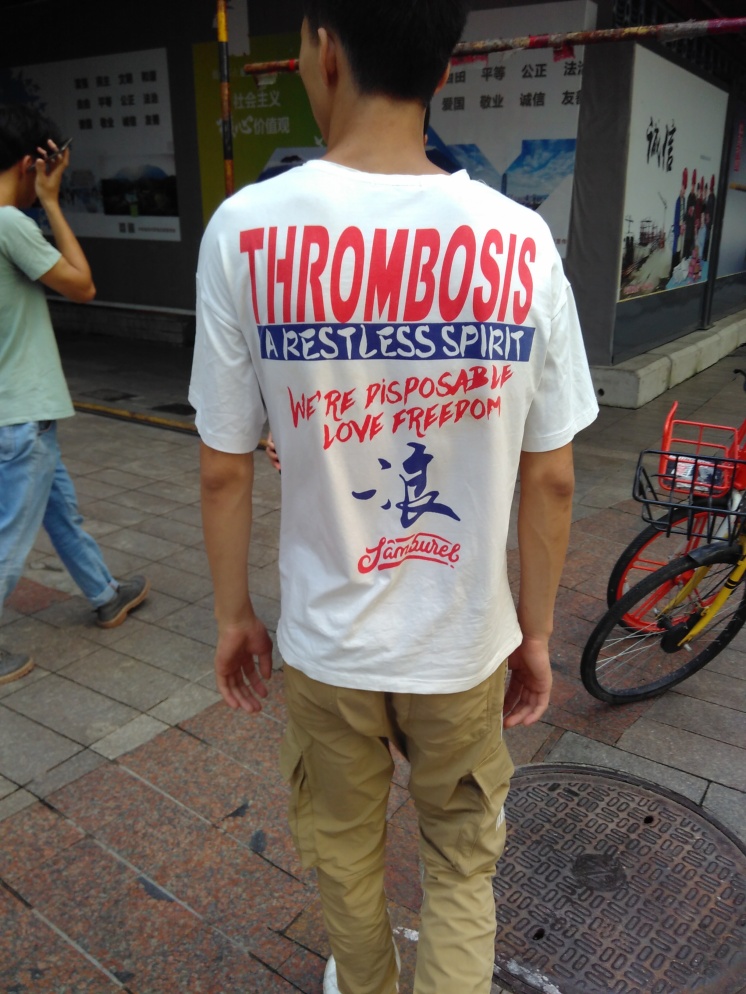 The kittens – both rescues – were quite skittish, and no matter what we did, they woke us up before 7 each morning. This actually ended up being a good thing, as we could enjoy the resort and balcony before the heat of the morning sun. Jay was delighted to be able to go running somewhere with no risk of being eaten by wild dogs or bears! Maeve mostly just sat on the balcony reading and drinking coffee until it became so hot we had to retreat back indoors or hit the pool. Such a hard life.

Another great feature of the resort was the direct shuttle bus they offered to the Hong Kong border, so on our last day we bade farewell to the kittens and joined the bus at the hotel. We were the only people on it so essentially had a private driver to the border, where we left mainland China and entered the Hong Kong Special Administrative Region.